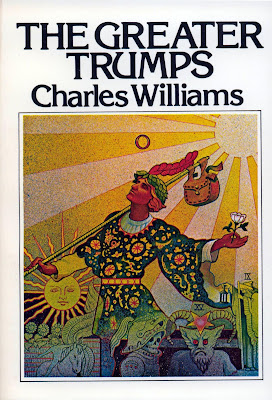 The storm lifted, and she found herself at the parting of the roads, and there, by the hedge, on the extreme wrong side, was a crouching figure. The snow was beginning to pile round it; the wind and flakes seemed to be rushing at it and centring on it. Sybil, holding the kitten firmly, went quickly across the road. For a moment, as she ran, she thought she saw another form, growing out of the driving snow--a tall figure that ran down on the white stairs of the flakes, and as it touched earth circled round the overwhelmed man. Before it a gleam of pale gold, as of its own reflection, since no break in the storm allowed the sinking sun to lighten the world, danced in the air, on the ground, on hands that were stretched out towards the victim. They seemed to touch him, as in the Sistine Chapel the Hand of God for ever touches the waking Adam, and vanished as she reached it. Only, for a moment again, she saw that gleam of flying gold pass away into the air, lost within the whiteness and the gloom. Then she was by him; she leaned down; she touched a shoulder, and held and shook it gently. She herself knelt in the snow to see the better--it was Lothair. His hat was gone; his glasses were gone; his coat was half-off him, flying loose; the buttons, she found, as she tried, with one hand, to pull it round him, were all off. He was blue and dangling.
Charles Williams ~ The Greater Trumps (1932), Chapter 9, “Sybil”
Posted by Arborfield at 8:00 am