John Wain's description of the Inklings 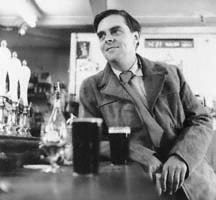 "This was a circle of instigators, almost of incendiaries, meeting to urge one another on in the task of redirecting the whole current of contemporary art and life.”

This is what John Wain an undergrad during the war but later Oxford Professor of Poetry, wrote on hearing of Williams' death:

“I was walking from Longwall Street, where I lodged, towards St. John's, and had just reached the Clarendon Building when a girl I knew by sight came peddling round the corner from New College Lane.  "John", she called out, "Charles Williams is dead."  She had never spoken to me before, and normally would have avoided using my Christian name.  But this was a general disaster, like an air-raid, and the touch of comradliness was right.  I asked her for details, but she knew nothing except that he was dead.  In any case, she could not talk, she was only just not crying.

I walked on towards St. John's.  The war with Germany was over.  Charles Williams was dead.  And suddenly Oxford was a different place.  There was still so much to enjoy, much to love and hate, much to get used to; but the war-time Oxford of my undergraduate days had disappeared.  Its pulse had stopped with the pulse of Williams."

John Wain was also an occasional member of the Inklings.

Posted by Arborfield at 8:21 am