Jack, in a hat 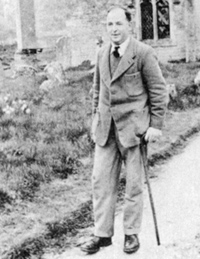 Now there are many stories about this famous hat, and Major (Warnie) Lewis recalls one of them in his Memoir prefacing the Letters. He writes:
Jack's clothes were a matter of complete indifference to him: he had an extraordinary knack of making a new suit look shabby the second time he wore it. One of his garments has passed into legend. It is said that Jack once took a guest for an early morning walk on the Magdalen College grounds, in Oxford, after a very wet night. Presently the guest brought his attention to a curious lump of cloth hanging on a bush. "That looks like my hat," said Jack; then joyfully, "It is my hat." And clapping the sodden mass on his head, he continued his walk.
That same hat was lost on one of our picnics, coming back from Cambridge at the end of a term. On the way to Cambridge, at the beginning of the next term, we looked inside the field gate where we had picnicked, and there was the hat, under the hedge, being used as a home for field mice. Jack retrieved it, of course, and later on continued to wear it.
Sometime after that, that same hat spent a week under the front seat of my car; and the very last time I drove the professor, the same hat sat squarely on his head.


Clifford Morris, "A Christian Gentleman", C.S. Lewis at the Breakfast Table and Other Remininscences (1979)
Posted by Arborfield at 5:22 pm