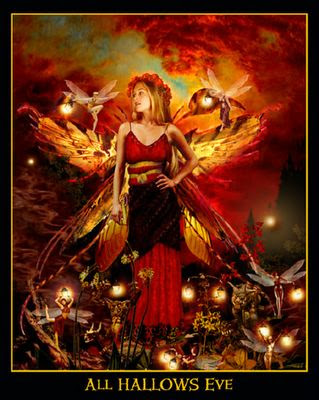 The hate seemed to swell in a nightmare bubble within the rose which was forming round them, cloud in cloud, overlying like petals. Simon made a quick half-spring as if to overleap it, and so did they; but he failed and fell back, and so did they. The smell of the rose was changing to the smell of his last act, to the smell of blood. He looked down; he saw below him the depth of the rose.
A sudden fresh blast of rain fell on him and drove him deeper, and so those others. It flashed past him in an infinity of drops, as of points falling-at first crystal, then of all colours, from those almost too dark to be seen through to those almost too bright to be seen. They fell continuously between him and those other faces, in which he could now see those waves passing which his devotee had seen in his own face. The bright showers of the hallows flashed, and beyond him he could see only his multiplied self; and all he could do against them was only done to himself.
Charles Williams - All Hallows Eve
Posted by Arborfield at 2:28 pm