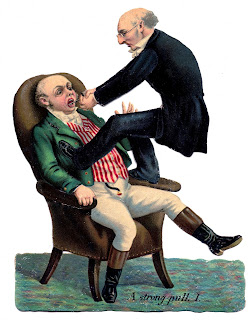 When I was a child I often had toothache, and I knew that if I went to my mother she would give me something which would deaden the pain for that night and let me get to sleep. But I did not go to my mother -- at least, not till the pain became very bad. And the reason I did not go was this. I did not doubt she would give me the aspirin; but I knew she would also do something else. I knew she would take me to the dentist next morning. I could not get what I wanted out of her without getting something more, which I did not want. I wanted immediate relief from pain: but I could not get it without having my teeth set permanently right. And I knew those dentists: I knew they started fiddling about with all sorts of other teeth which had not yet begun to ache. They would not let sleeping dogs lie, if you gave them an inch they took an ell.
.
Now, if I may put it that way, Our Lord is like the dentists. If you give Him an inch, He will take an ell. Dozens of people go to Him to be cured of some one particular sin which they are ashamed of or which is obviously spoiling daily life. Well, He will cure it all right: but He will not stop there. That may be all you asked; but if once you call Him in, He will give you the full treatment.
C.S. Lewis
Mere Christianity (1952)
Chapter 9: 'Counting the Cost'
Posted by Arborfield at 7:52 am