The Death of Charles Williams 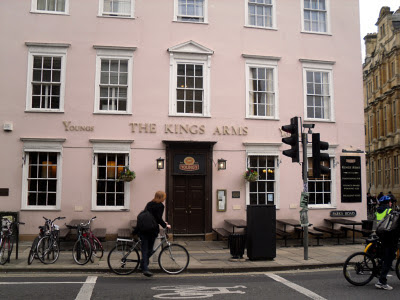 [The King's Arms on the junction of Parks Road & Holywell Street, Oxford]
Tuesday 15th May, 1945.


At 12.50 this morning… the telephone rang, and a woman's voice asked if I would take a message for J — "Mr. Charles Williams died in the Acland this morning". One often reads of people being "stunned" by bad news, and reflects idly on the absurdity of the expression; but there is more than a little truth in it. I felt just as if I had slipped and come down on my head on the pavement. J had told me when I came into College that Charles was ill, and it would mean a serious operation: and then went off to see him: I haven't seen him since. I felt dazed and restless, and went out to get a drink: choosing unfortunately the King's Arms, where during the winter Charles and I more than once drank a pint after leaving Tollers at the Mitre, with much glee at "clearing one throats of varnish with good honest beer": as Charles used to say.
There will be no more pints with Charles: no more "Bird and Baby": the blackout has fallen, and the Inklings can never be the same again. I knew him better than any of the others, by virtue of his being the most constant attendant. I hear his voice as I write, and can see his thin form in his blue suit, opening his cigarette box with trembling hands. These rooms will always hold his ghost for me. There is something horrible, something unfair about death, which no religious conviction can overcome. "Well, goodbye, see you on Tuesday Charles" one says — and you have in fact though you don't know it, said goodbye for ever. He passes up the lamplit street, and passes out of your life for ever.
There is a good deal of stuff talked about the horrors of a lonely old age; I'm not sure that the wise man — the wise materialist at any rate — isn't the man who has no friends. And so vanishes one of the best and nicest men it has ever been my good fortune to meet. May God receive him into His everlasting happiness.
Warren (Warnie) Lewis
Brothers & Friends (Harper & Row 1982)
Posted by Arborfield at 7:36 am