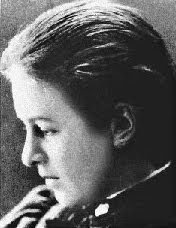 It was in October 1937 that I met her first--invited to tea with her in her Campden Hill Square house. She had just had one of her bad illnesses. The door of the room into which I was shown was directly behind the big arm-chair in which she was sitting facing a glowing fire. As I entered she got up and turned round, looking so fragile as though 'a puff of wind might blow her away' might be literally true in her case, but light simply streamed from her face illuminated with a radiant smile. . . . One could not but feel consciously there and then (not on subsequent recognition or reflection) that one was in the presence of the extension of the Mystery of our Lord's Transfiguration in one of the members of His Mystical Body. I myself never saw it repeated on any later meeting though others have probably seen the same thing at other times. It told one not only of herself, but more of God and of the Mystical Body than all her work put together."

Such an outpouring of light has been observed elsewhere-in certain great men (such as, I think, Leonardo) and by lovers in lovers. It is as if the physical flesh itself had become, or at least had
seemed to become, its unfallen self; as if that Original which was seen in the Transfiguration chose at certain moments to exhibit something of its glory in its created derivations. That such a phenomenon was observed in her is credible enough; it was her reward, and (after the proper heavenly manner) it was given to others.

From CW's introduction to
Letters of Evelyn Underhill
Posted by Arborfield at 7:50 am

In Eastern Orthdox Christianity, ascetic holy people and saints have often been reported to glow with 'uncreated light'.