The Moon of the Tarots 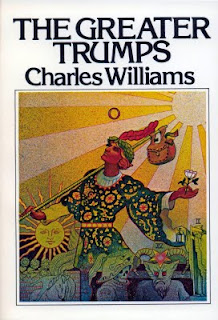 Nancy found herself alone. The mist round her was thinning; she could see a clear darkness beyond. She had known one pang when she felt Henry's hands slip from around hers; then she had concentrated her will more entirely on doing whatever might be done to save whatever had to be saved from the storm, which now she no longer heard. But the fantastic mission on which she was apparently moving did not weigh upon her; her heart kept its lightness. There had come into her life with the mystery of the Tarots a new sense of delighted amazement; the Tarots themselves were not more marvellous than the ordinary people she had so long unintelligently known. By the slightest vibration of the light in which she saw the world she saw it all differently; holy and beautiful, if sometimes perplexing and bewildering, went the figures of her knowledge. They were all "posters of the sea and land", and she too, in a dance that was happy if it was frightening. Nothing was certain, but everything was safe--that was part of the mystery of Love. She was upon a mission, but whether she succeeded or not didn't matter. Nothing mattered beyond the full moment in which she could live to her utmost in the power and according to the laws of the dance. The dance of the Tarots, the dance of her blood, the dance of her mind, and whatever other measure it was in which Sybil Coningsby trod so high and disposed a movement. Hers couldn't be that yet, couldn't ever perhaps, but she could understand and answer it. Her father, Henry, Ralph, they were all stepping their parts, and she also--now, now, as the last shreds of the golden mist faded, and, throbbing and glad, she came into the dark stillness which awaited her.
Chapter 14
The Greater Trumps (1932)
Charles Williams
Posted by Arborfield at 8:40 pm