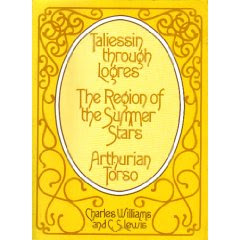 Dec. 15th 1945:
“... I am (these last 6 months) immersed in a v. different poet who I think great – Charles Williams: the two volumes of his Arthurian poems Taliessin and The Region of the Summer Stars. Inexcusably difficult, as I always told him, but here there really is something behind the difficulty – that something wh. we all need most in literature at present & wh. I wd. call opaque splendour – thick, rich, solid, heavy – porphyry, gold diamond.”
CS Lewis ~ Collected Letters
(Both may be obtained via Amazon)
.
Taliesin [Taliessin]

Taliesin (c. 534 – c. 599) was a British poet of the post-Roman period whose work has possibly survived in a Middle Welsh manuscript, the Book of Taliesin. Taliesin was a renowned bard who is believed to have sung at the courts of at least three Celtic British kings.

A maximum of eleven of the preserved poems have been dated to as early as the 6th century, and were ascribed to the historical Taliesin. The bulk of this work praises King Urien of Rheged and his son Owain mab Urien, although several of the poems indicate that he also served as the court bard to King Brochfael Ysgithrog of Powys and his successor Cynan Garwyn, either before or during his time at Urien's court. Some of the events to which the poems refer, such as the Battle of Arfderydd (c. 583), are referred to in other sources.

His name, spelled as Taliessin in Alfred, Lord Tennyson's Idylls of the King and in some subsequent works, means "shining brow" in Middle Welsh. In legend and medieval Welsh poetry, he is often referred to as Taliesin Ben Beirdd ("Taliesin, Chief of Bards" or chief of poets). He is mentioned as one of the five British poets of renown… in the Historia Brittonum, and is also mentioned in the collection of poems known as Y Gododdin. Taliesin was highly regarded in the mid-twelfth century as the supposed author of a great number of romantic legends.
.
Wikipedia
Posted by Arborfield at 7:53 am

Thanks for sharing this ... as an Arthurian enthusiast, this is great stuff, and I'll have to check it out.