C.S. Lewis and THE Horse 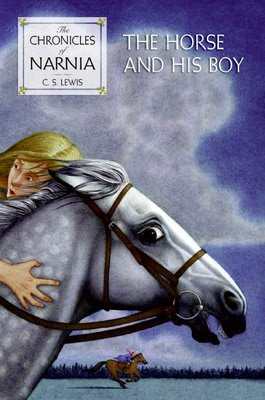 'Kidnapped’ said the Horse. 'Or stolen, or captured -whichever you like to call it. I was only a foal at the time. My mother warned me not to range the southern slopes, into Archenland and beyond, but I wouldn't heed her. And by the Lion's Mane I have paid for my folly. All these years I have been a slave to humans, hiding my true, nature and pretending to be dumb and witless like their horses.'

‘Why didn't you tell them who you were ?'

'Not such a fool, that's why. If they'd once found out I could talk they would have made a show of me at fairs and guarded me more carefully than ever. My last chance of escape would have been gone.'

'And why - ' began Shasta, but the Horse interrupted him.

'Now look’ it said, 'we mustn't waste time on idle questions. You want- to know about my master the Tarkaan Anradin. Well, he's bad. Not too bad to me, for a war horse costs too much to be treated very badly. But you'd better be lying dead tonight than go-to be a human slave in his house tomorrow.’

'Then I'd better run away/ said Shasta, turning very pale.'

'Are you going to run away too ?’ said Shasta.

'Yes, if you'll come with me’ answered the Horse. 'This is the chance for both of us. You see if I run away without a rider, everyone who sees me will say "Stray horse " and be after me as quick as he can. With a rider I've a chance, to get through. That's where you can help me. On the other hand, you can't get very far on those two silly legs of yours (what absurd legs humans have!) without being overtaken. But on me you can outdistance any other horse in this country. That's where I can help you. By the way, I suppose you know how to ride ?’

'Ridden the what?’- retorted the Horse with extreme contempt. (At least, that is what he meant. Actually it came out in a sort of neigh - 'Ridden the wha-ha-ha-ha-ha’ Talking horses always become more horsy in accent when they are angry.)

'In other words’ it continued, 'you can’t ride. That's a drawback. I'll have to teach you as we go along. If you can't ride, can you fall ?' - ' I suppose anyone can fall’ said Shasta.

'I mean can you fall and get up again without crying' and mount again and fall again and yet not be afraid of falling?'

'Poor little beast’ said the Horse in a gentler tone. ‘I forget you're only a foal. We'll make a fine rider of you in time. And now - we mustn't start until those two in the hut are asleep. Meantime we can make our plans.