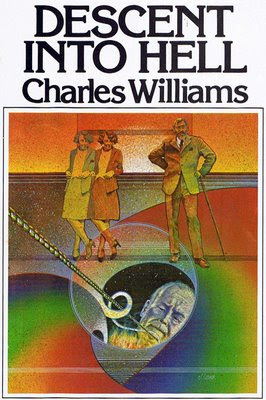 Half jokingly (no, more than half) I've uttered the phrase "You're going to hell," to which a friend has responded "Well, I'll be among friends."

The difference between eternity in heaven and eternity in hell is drastically different depending on who you ask. Some see heaven as a bunch of people floating around on clouds, reuniting with other godly people, playing harps, wearing white robes and glowing in the heaven light. In contrast to this, hell is a dark party where people indulge their sinful desires, smoking, drinking and partaking of sexual pleasure by flaming red light. Though the flaws in both perceptions are numerous, I think the greatest fault in this perspective is the similar community that heaven and hell share.

Williams and Lewis, I believe, would argue that hell is by no means a place where one is "among friends." Rather it is a place we choose for ourselves that we might be by ourselves, and only on realizing this desire do we discover how much we detest it. Consider Lawrence Wentworth, a man whose desire to possess and be loved by Adela drives him deeper and deeper into self-deception. He pities himself and begins to loathe the woman he loved. His descent into hell is essentially a descent into himself, a withdrawing from society and reality that he might be with and love himself in his own mind and imagination. Yet even this is not love. "A man cannot love himself; he can only idolize it, and over the idol delightfully tyrannize--without purpose."

Wentworth denies all chances of coming back into community with others. He is driven by a desire to avoid others, to withdraw, to attempt to find pleasure in his imagined beloved. In the end even this vision leaves him. When the reader leaves Wentworth he is in the depths of hell, by himself without rope or moon to save him.

Is this not a more accurate depiction of the kind of hell we fear most? One in which we are cut off from community, separated from the love of God (even if we have only experienced it in the imperfect human version)? I would argue that anyone who really chooses hell is unaware of all they are losing. Hell is the utter absence of God. If we experience pain, loneliness and despair on this earth where God is present, how much more would we suffer in a hell where he is not? Perhaps threatening unbelievers with the flames of a hell filled with the sinful and unclean is not only ineffective, but dreadfully inaccurate.

Amanda Kuehn - Narnia Business Blog:
http://nwc-csl.blogspot.com/2008/11/lonelyim-mr-lonely.html
.
In Charles Williams's novel Descent into Hell, Hell turns out to be nothing other than a refusal to see things as they really are. Arguably his finest novel, the "descent" in the title happens to an ordinary (if extraordinarily selfish) historian named Wentworth, whose daily choices to cheat on the truth slowly but surely lead him into a terrifying state of isolation and egotism. Heaven, by contrast, is increasingly inhabited by the novel's heroine, Pauline Anstruther, who as the book proceeds learns to face her fears (and her ancestors!) and to love the truth exactly as it is. The plot turns around the latest production of fictional playwright Peter Stanhope, but for Williams Pauline's realization of the divine glory incarnate in all of life is the deeper truth that sustains this and every other drama.
.
Doug Thorpe -- Amazon.com review
.
The key to William's mystically oriented theological thought, Descent into Hell (arguably William's greatest novel) is a multidimensional story about human beings who shut themselves up in their own narcissicstic projections, so that they are no longer able to love, to "co-inhere". The result is a veritable hell.
Posted by Arborfield at 7:37 am

Very helpful review and I'm glad I've found your blog. I struggled through Descent last year on my own. Before I attempt my next William's book, I'll check back here for insights.

Dear Booklady (what a lovely tag)... You are not alone in 'struggling through'... most 1st readers of Williams have similar experiences, BUT somehow instinctively know that her we have an important writer.

Jack Lewis too thought him 'impenetrable', but VERY important.