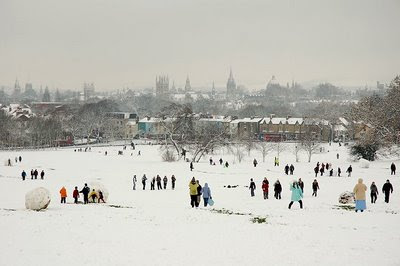 [View of the ‘dreaming spires’ in February 2007 from South Park]

Mary Rogers gives two vignettes of Lewis in Headington in her article "C.S. Lewis — God’s Fool" in Oxford (the Journal of the Oxford Society) for November 1998:
"Jack never minded looking a fool in a good cause. My sister-in-law tells me that he used to attend an annual party in Headington where guests were expected to arrive, not exactly in fancy dress, but to suggest some topic the hostess had decided upon. After Jack’s marriage to Joy, he brought her along, obviously much to her disgust. She had chosen not to represent some character in Poetry or Opera.... Lewis (of course) represented Wotan, wearing a black eye-shade over one eye — without embarrassment.
"Another Lewis-the-fool story involved an elderly dog. Both brothers were animal lovers, and cared for each dog lovingly to his last breath. One, in its extreme old age (probably Baron or Mr Papworth, also known as "Tykes") became very difficult, as we all do, in time. It was one of the rare sights of Headington to see Jack feeding an animal who was sensitive about being seen eating, and would not eat on home territory. So Jack would walk in front holding the dog dish in one hand, and a spoon in the other, ladling the food backwards over his shoulder to the following shambling dog, the leader being quite unmindful of the passersby and their reactions, as long as the dog got fed."
Posted by Arborfield at 9:37 am