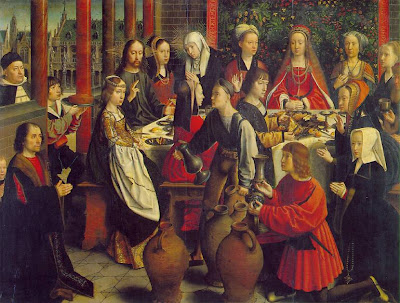 [The Wedding Feast of Cana - Gerard David – 1500]
THE final Bishop of Winchester who haunted my sermon was John V. Taylor, who suspended his episcopal duties in the 1980s to spend several months directing a Passion and resurrection play in his own cathedral.

Having mentioned this in my sermon, I was besieged by a queue of people at coffee who had been part of the cast, eager to tell me how even the most minor roles had been totally life-changing.

It all reminded me of a poem by Charles Williams, much loved by Taylor, with the catchy title “Apologue on the Parable of a Wedding Guest”. Williams’ poem imagines a fancy dress ball hosted by Prince Immanuel. Everyone is invited, but everyone must wear fancy dress, must dare to pose as the selves they would be had they been granted their heart's desire.


Apologue on the Parable of a Wedding Guest (part)
This guest his brother's courage wore,
that his wife's zeal, while, just before,
she in his steady patience shone;
there a young lover had put on
the fine integrity of sense
his mistress used; magnificence
a father borrowed from his son,
who was not there, ashamed to don
his father's wise economy.
No he or she was he or she
merely...
Posted by Arborfield at 7:45 am