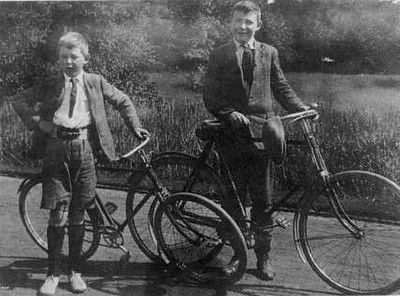 After dinner I read about half of the batch of [the new] Hobbit* which Tollers** sent me: how does he keep it up? The crossing of the marshes by Frodo, Sam and Gollum in particular is magnificent.. After tea another walk...While I was hesitating in the wet grey twilight, a corncrake started up in a field of young wheat, and no nightingale could have ravished me as did its harsh song... As I plodded home in the rain, under weather conditions themselves extraordinarily reminiscent of old days, my mind was full of pictures evoked by the corncrake: particularly of smoking cigarettes with Jack on the top of the bow of the study window, reached by climbing out of our bedroom window.

But while my thoughts are tender, I could not summon a single regret; at 52 I may be nearing the end of the race, but how infinitely preferable it is to be 52 rather than 16! It is astonishing to me that practically the whole weight of literature takes it as axiomatic that nothing can make up for the loss of youth; at least Lamb and Stevenson are the only two men I can think of at the moment who have anything to say on the other side.

No, give me the level road of the 'fifties', and anyone who likes may sigh for the ecstasies of youth. Ecstasies there are to be sure: I remember as if it were last week the first time I walked up College with a double first: but then so do I remember the time when I was senior enough to suffer agonies at being snubbed by the head of the House.

Posted by Arborfield at 8:05 am