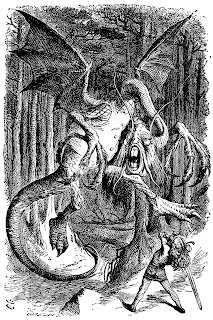 "… the critic metamorphoses into the monster of the jabberwock, an unnatural creature that symbolises… perversion… This creature creates cacophony through a ‘conflicting babel’ of opinion: “For it is of their nature that the jabberwocks of historical and antiquarian research burble in the tulgy wood of conjecture, flitting from one tum-tum tree to another” (p. 56). They no longer constitute a physical danger to others because of the myopia, which resembles that of the ‘friends’ and ‘descendants’: “Noble animals, whose burbling is on occasion good to hear; but through their eyes of flame may sometimes prove searchlights, their range is short” (p 56). Such shortsightedness hints at a greater spiritual danger to themselves as well as to others, for the ‘conflicting babel’ of their opinions reminds us of the confusion of tongues at the Tower of Babel, as the epitome of the sin of pride (of course… the critics destroyed the tower of the artist in their pride). Pride and selfishness, myopia, a ‘conflicting babel’ of opinion, destructiveness, chaos, all characterise the critic – truly a monster."
Tolkien’s Art 'A Mythology for England' ~ Jane Chance Nitzsche (Page 12)
Discussing and quoting from ‘The Critic as Monster: Tolkien’s Lectures [1936]
Posted by Arborfield at 8:13 am