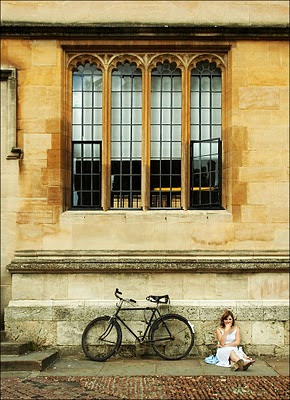 [Outside the Bodleian Library in Oxford]

"Talking about bicycles," said my friend, "I have been through the four ages. I can remember a time in early childhood when a bicycle meant nothing to me: it was just part of the huge meaningless background of grown-up gadgets against which life went on. Then came a time when to have a bicycle, and to have learned to ride it, and to be at last spinning along on one's own, early in the morning, under trees, in and out of the shadows, was like entering Paradise. That apparently effortless and frictionless gliding -- more like swimming than any other motion, but really most like the discovery of a fifth element -- that seemed to have solved the secret of life. Now one would begin to be happy. But, of course, I soon reached the third period. Pedalling to and fro from school (it was one of those journeys that feel up-hill both ways) in all weathers, soon revealed the prose of cycling. The bicycle, itself, became to me what his oar is to a galley slave."

"But what was the fourth age?" I asked.

"I am in it now, or rather I am frequently in it. I have had to go back to cycling lately now that there's no car. And the jobs I use it for are often dull enough. But again and again the mere fact of riding brings back a delicious whiff of memory. I recover the feelings of the second age. What's more, I see how true they were -- how philosophical, even. For it really is a remarkably pleasant motion. To be sure, it is not a recipe for happiness as I then thought. In that sense the second age was a mirage. But a mirage of something."

"I mean this. Whether there is, or whether there is not, in this world or in any other, the kind of happiness which one's first experiences of cycling seemed to promise, still, on any view, it is something to have had the idea of it. The value of the thing promised remains even if that particular promise was false -- even if all possible promises of it are false."