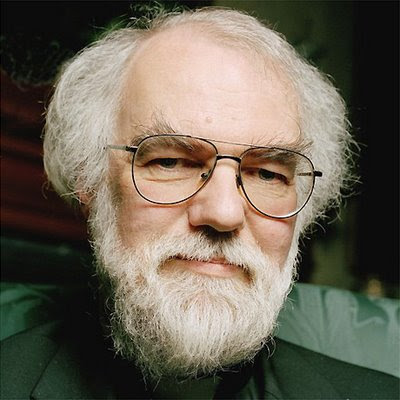 (The Times Literary Supplement ~ 18 June 2008)
The Archbishop of Canterbury admires a new consideration of the critic, poet and theologian Charles Williams.
Of the three central and iconic figures of the “Inklings”, Charles Williams has always been rather the odd man out in comparison with J. R. R. Tolkien and C. S. Lewis. This is not only to do with Tolkien’s well-documented antipathy towards Williams; there is a whiff of brimstone in the nostrils of some when they read of his involvement in hermetic or occultist groups, and of his agonized and confused sexuality. The novels are bewildering in style and content (Ashenden quotes C. S. Lewis’s acerbic comment that Williams did not always know how to hit the golden mean between Dante and Wodehouse), the late poetry famously obscure, and the critical and theological essays wildly idiosyncratic. Yet it is impossible not to feel that he inhabited a larger world than either Tolkien or Lewis (as the latter acknowledged); and someone who made so deep an impact on both T. S. Eliot and W. H. Auden, neither of them carelessly generous in their literary or personal estimates of others, surely deserves a second look. Geoffrey Hill has recently stressed the energy and intelligence of Williams’s work on the history of English poetry. Theologians continue to circle round the doctrinal work with nervous respect. And the late “Taliessin” poems still excite something of the same uncertain fascination in a surprising variety of readers.

In Charles Williams: Alchemy and integration, Gavin Ashenden sets himself two main tasks and performs them with elegant efficiency. The first is to investigate Williams’s involvement in the occult during the 1910s and 20s. Ashenden notes that most of Williams’s biographers and commentators have wrongly associated him with the Order of the Golden Dawn – a potent influence on twentieth-century Western occultism. In fact, Williams’s association was with the group that broke away from the Golden Dawn under the leadership of A. E. Waite, the Fellowship of the Rosy Cross, and that attempted to adapt the Continental Rosicrucian tradition to British circumstances, rejecting ritual magic in the strict sense and building more consistently on Jewish and Christian sources.

It is clear that Williams’s interest in Kabbalistic vocabulary and speculation derived almost entirely from Waite (Ashenden follows Waite’s eccentric spelling, “Q’abalah” – a minor irritant in the book). Although Williams had ceased to be actively involved in the Fellowship after about 1930, there are countless traces of Waite’s characteristic ideas and terminology in the novels and the Taliesin cycles. Ashenden argues persuasively that Williams’s complex symbolism in these works of the human body as a kind of microcosmic geography is a development from the Kabbalistic schemata that Waite outlines. The Rosicrucian/Kabbalist melange of ideas was a crucial element in what was certainly Williams’ most original contribution to twentieth century Christian thought, his theological evaluation of the erotic. And what Ashenden establishes is that this was rooted less in any occult or pseudo-tantric practice than in the bridal imagery of Kabbalist literature as mediated by Waite.

This opens up the second of the questions that Ashenden sets out to clarify. Since the publication of Lois Lang-Sims’ recollections of Williams in her autobiography and the more recent publication of some of her correspondence with him, there has been much speculation about what look like elements of ritual sadism in Williams’s relationships with at least some women. Balanced assessment is difficult; but what Ashenden makes clear is that the exceptionally tormented and fantasy-ridden relation with Lang-Sims was going on during a period when Williams’s general mental balance was insecure. Ashenden has had access to Williams’s correspondence with Phyllis Jones, the Oxford University Press secretary who had engaged his affections with dangerous intensity in the 1920s; the correspondence continued for the rest of his life. Again, earlier biographers are corrected: it has been assumed and stated that the friendship had cooled on Williams’s side after Phyllis’s first marriage, but the letters suggest that his mythologically charged obsession with her changed hardly at all. The point, however, is that these letters illustrate vividly the turmoil of his mind in the early 1940s. His weaving of fantasy patterns in some of what he wrote privately at this time is on the edge of the psychotic, and he was clearly under exceptional mental strain.

What seems to have restored some balance was a kind of “renegotiation” of his marriage. The word is probably misleading; Williams was never literally unfaithful to his wife, but the various intimacies with younger women were not wholly innocent or unproblematic. Yet his correspondence with his wife between 1943 and his death two years later suggests that he had come to terms afresh both with the actual and specific responsibilities proper to marriage, and with the critical and more prosaic responses of his wife to his work and lifestyle. He writes of having been anchored again in an “ordinary” humanity, rather than a near-messianic bardic isolation. Ashenden does not quote it directly, but there is a chilling moment in Lois Lang-Sims’s recollections where Williams asks, with obvious self-reference, what kind of relationships are possible for someone who is not really human. It is the furthest point of his inhabiting of the bardic myth, and Ashenden’s discussion strongly suggests that it was a point at which he recognized extreme danger and – consciously or not – began to work in a different way at his marriage.
.
Ashenden, then, tells a story of integration. Williams’s obsessive mythologizing of personal sexuality settles privately into a strengthening of his marriage that better reflects the public refining of his theology of “romantic love”. And Ashenden’s discussions of some of the main fictional works show a parallel movement away from the fascination with spiritual power in its own right towards the developed doctrine of self-giving exchange – though that is not without its ambiguities, as the Lang-Sims correspondence shows.

Charles Williams: Alchemy and integration is altogether a very well-crafted book, using a great deal of epistolary and other documentation for the first time and opening up a good many new avenues for discussion as it lays to rest some, if not quite all, of the more lurid versions of his career. It should be the first swallow of a new summer in the study of someone who was, despite the oddities and even grotesqueries, a deeply serious critic, a poet unafraid of major risks, and a theologian of rare creativity.
Gavin Ashenden ~ CHARLES WILLIAMS Alchemy and integration
Kent State University Press.

Rowan Williams is Archbishop of Canterbury and was formerly Lady Margaret Professor Divinity at Oxford.
Posted by Arborfield at 7:18 am