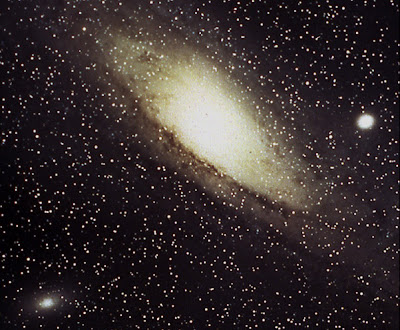 We are inveterate poets. Our imaginations awake. Instead of mere quantity, we now have a quality--the sublime. Unless this were so, the merely arithmetical greatness of the galaxy would be no more impressive than the figures in a telephone directory. It is thus, in a sense, from ourselves that the material universe derives its power to over-awe us. To a mind which did not share our emotions, and lacked our imaginative energies, the argument from size would be sheerly meaningless. Men look on the starry heavens with reverence: monkeys do not. The silence of the eternal spaces terrified Pascal, but it was the greatness of Pascal that enabled them to do so. When we are frightened by the greatness of the universe, we are (almost literally) frightened by our own shadows: for these light years and billions of centuries are mere arithmetic until the shadow of man, the poet, the maker of myth, falls upon them. I do not say we are wrong to tremble at his shadow; it is a shadow of an image of God. But if ever the vastness of matter threatens to overcross our spirits, one must remember that it is matter spiritualized which does so. To puny man, the great nebula in Andromeda owes in a sense its greatness.