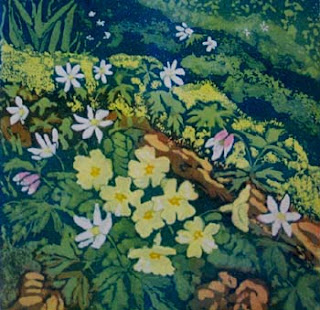 In The Pilgrim’s Regress, John, the chief character longs for an island in the west that he has seen in a vision. His longing for the island leads him on a journey far from. his home in Puriunia and far from the Landlord (God). However, when John reaches the island he finds out that it is merely the back side of the mountains of the Landlord and that he must retrace his steps in order to arrive once again at his real home.
Lewis communicates the power of longing in John’s first vision of the island in The Pilgrims Regress. There comes to John from behind him the sound of a musical instrument, very sweet and very short, and after it a full clear voice — so high and strange that John thinks it is very far away, further than a star. The voice says, “Come.” Then John sees that there is a stone wall beside the road. However, this garden wall is unique in that it has a window in it. There is no glass in the window, and there are no bars; It is just a square hole in the wall. Through it he sees a green wood full of primroses, and he remembers suddenly how he went into another wood to pull primroses, as a child, very long ago — so long that even in the moment of remembering the memory seems still out of reach. While he strains to grasp it, there comes to him from beyond the wood a sweetness and a pang so piercing that instantly he forgets his father’s house and his mother, and the fear of the Landlord, and the burden of the rules “All the furniture of his mind as taken away.” A moment later he finds himself sobbing. The sun has gone in. He cannot quite remember what has happened, whether it had happened in this wood or in the other wood when he was a child. it seems to him that through a mist he has seen a calm sea, and in the sea an island, where the smooth turf slopes down unbroken to the bays.
There is probably no more dominant theme in all of Lewis’s writings than this theme of longing, or what the Germans call sehnsucht, or what Lewis came to call joy. The theme appears in his sermons, like The Weight of Glory, where he says that he feels a certain shyness in regard to speaking of this longing. He says that he is trying to rip open the inconsolable secret an each of his listeners, a secret that pierces with such sweetness that when the mention it becomes imminent …
Will Vaus -- Mere Theology: A Guide To The Thought Of C.S. Lewis,
Chapter 1 – Defending the Faith
Posted by Arborfield at 8:16 am