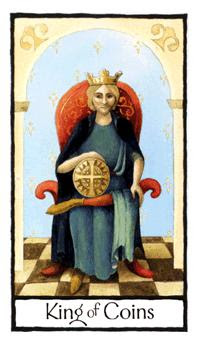 Charles Williams interest in the Tarot is well known. Over the next week or so we will have the opportunity of reading excerpts from his "Bors to Elayne: on the King's Coins", one of the more accessible poems in TALIESSIN THROUGH LOGRES. On the surface about coinage, but at a much deeper level a vehicle for Williams to explore co-inherence... or as he has it here: The means of exchange.
The King of Coins, one of the most powerful of the Tarot pack is described thus:
Energy, Diligence, Patience and Naivety, The King of Coins represents a tie of the force of fire with the fertile but sluggish power of the earth. Slow but steady growth accompanies this king. Satisfied with his world of sufficiency he will seldom express creative ideas or long for a wider horizon. Learn from the patience and the endurance of the King of Coins if you are heading for long term objectives. Farsightedness is what you should obtain, because the worries of everyday life are not constituting the great scheme of life. Here is what Charles made of it:
The king has set up his mint by Thames.
He has struck coins; his dragon's loins
germinate a crowded creaturely brood
to scuttle and scurry between towns and towns,
to furnish dishes and flagons with change of food;
small crowns, small dragons, hurry to the markets
under the king's smile, or flat in houses squat.
The long file of their snout crosses the empire,
and the other themes acknowledge our king's head.
They carry on their backs little packs of value,
caravans; but I dreamed the head of a dead king
was carried on all, that they teemed on house-roofs
where men stared and studied them as I your thumbs' epigrams,
hearing the City say Feed my lambs
to you and the king; the king can tame dragons to carriers,
but I came through the night, and saw the dragonlets' eyes
leer and peer, and the house-roofs under their weight
creak and break; shadows of great forms
halloed them on, and followed over falling towns.
I saw that this was the true end of our making;
mother of children, redeem the new law.
Posted by Arborfield at 8:15 am

Just out of curiosity, which Tarot deck is that (I mean, who is the illustrator)?

To be perfectly honest, I am not sure. There are so many out there, and I cannot remember which it is. Sorry...