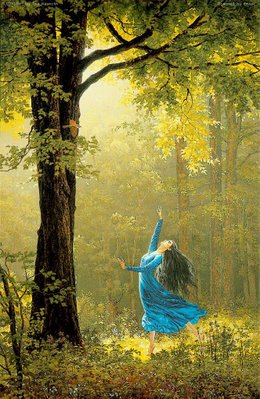 He heard afar their hurrying feet,
he snuffed an odour strange and sweet;
he smelled their coming long before____________4200
they marked the waiting threat at door.
His limbs he stretched and shook off sleep,
then stood at gaze. With sudden leap
upon them as they sped he sprang,
and his howling in the arches rang.____________4205
Too swift for thought his onset came,
too swift for any spell to tame;
and Beren desperate then aside
thrust Lúthien, and forth did stride
unarmed, defenceless to defend________________4210
Tinúviel until the end.
With left he caught at hairy throat,
with right hand at the eyes he smote
- his right, from which the radiance welled
of the holy Silmaril he held.__________________4215
As gleam of swords in fire there flashed
the fangs of Carcharoth, and crashed
together like a trap, that tore
the hand about the wrist, and shore
through brittle bone and sinew nesh,___________4220
devouring the frail mortal flesh;
and in that cruel mouth unclean
engulfed the jewel's holy sheen.

However, JRRT did finish the story. See "The Silmarillion", Chapter 19.

Posted by Arborfield at 4:55 pm